Andy Offutt Irwin (born December 14, 1957) is an American storyteller, singer-songwriter, and humorist. Born and raised in Covington, Georgia, a small town outside of Atlanta, Irwin began his career in 1984 with an improvisational comedy troupe at Walt Disney World. After five years he shifted to performing as a singer-songwriter, touring the Southeast. In the mid-1990s, Irwin branched into performances for children and since then has appeared in hundreds of schools (from preschools to colleges) and countless public libraries.

Irwin continued to perform as a singer-songwriter and added storytelling to these performances, usually telling one story (about ten to twenty-five minutes in length) during a show. In the fall of 2004, he decided to pursue storytelling as a career and quickly achieved national prominence. Irwin now appears regularly in storytelling festivals across the United States. As of 2020, he has released 13 albums which feature stories, songs or whistling and has collected numerous awards for them. In 2013, Irwin received the Circle of Excellence Award from the National Storytelling Network.

Currently, Irwin divides his time between storytelling concerts and children's performances. Additionally, he has written personal essays that have been published in his hometown newspaper and reprinted in The Bitter Southerner.

Andy Offutt Irwin is a native of Covington, Georgia, a small town in the United States' Deep South about 35 miles east of Atlanta. As a child, he always wanted to be a musician, learning to play drums in elementary school band and adding guitar as a teenager. It was also in his youth that Irwin discovered his talent for imitating different sounds and the speech of others. Irwin later attended Georgia College where he received a B.S. in Sociology in 1983. 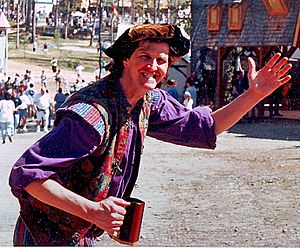 Starting in 1984, Irwin spent five years writing, directing, and performing shows with the improvisational comedy troupe SAK Theatre at Disney World. Upon returning to Georgia, Irwin began to focus on singing and songwriting, though he always kept comedic elements in his music. Beginning in 1991, Irwin toured the Southeast as a singer-songwriter. From 1995 to 2001, Irwin sang humorous songs, played guitar, and performed comedy as "Offutt the Minstrel" at the Georgia Renaissance Festival. He also performed at the Kansas City Renaissance Festival during the 1980s. From 1997 through 2005 Irwin directed the annual Cracker Crumble, an evening of politically satirical skits put on by the Georgia Press Association for Georgia politicians and lobbyists.

Evolution as a storyteller

While performing with his band in the early 1990s, Irwin would often tell a story about a song before performing it. "I could do a 10-minute introduction for a three-minute song." He would usually end these stories with the phrase, "but I digress," before getting back to his musical performance. One evening a member of the band said to him "You know, the digressions are the best part."

Around 1996 while performing at the Georgia Renaissance Festival (GARF), Irwin met nationally prominent storyteller Carmen Deedy. Deedy had previously been a GARF performer and was joining several current performers for dinner after the festival. After spending several hours interacting over dinner, Deedy said to Irwin, "You're a storyteller". After seeing Irwin perform at Eddie's Attic, Deedy explained the storytelling circuit, and encouraged Irwin to develop his storytelling, splitting a storytelling show with Irwin at Atlanta's 14th Street Playhouse. Leaving his guitar at home, "to stretch myself a bit," it was Irwin's first storytelling gig.

In 2005, Irwin appeared as a Featured New Voices Storyteller at the National Storytelling Festival (which Irwin refers to as the "Super Bowl" of storytelling). This appearance resulted in him getting eleven storytelling gigs nationwide and launched his career as a full-time teller.

Storytelling as a performance form

Prior to deciding to become a full-time storyteller, Irwin worked as a comedian "for a few minutes". During this time, Irwin won the Farber Invitational stand-up competition at the Punchline comedy club in Atlanta. However, Irwin came to see that the days of storytelling comedians had passed. Irwin also realized that his style of performance was at odds with the main venue available to comedians today: comedy clubs. (Irwin joking refers to comedy clubs as "evil, smelly places".) Some of his stories are an hour in length, and Irwin notes, "[t]here was a time when comedians could do that but they can't anymore because the clubs give them three minutes, and they are timing the laughs per minute." Using storytelling as a theatrical form allows Irwin to create more fully drawn characters and to explore darker subject matters as well. "Although I like to think of my storytelling as funny, I can have these serious moments. I'm not depending on the audience to laugh the whole time ... I hope there's content with the form."

Irwin "takes the humor very seriously ... I remember being a little kid wondering why we laugh and what makes me laugh. I always was a class clown. I was always interested in what makes laughter happen and now I get to dig into the theory of it every day." Irwin thinks of himself as a fiction writer and refers to himself as a humorist, and states, "I call myself a humorist and storyteller instead of a comedian because I play in libraries and there's no three-drink minimum." Irwin's stories often reflect life in a small Southern town with recurring themes of growing up and growing old, the bonds of family, the complexities of racial relations in the Deep South, especially during the 1960s and the important art of the practical joke.

Many of Irwin's stories revolve around his fictional aunt, Dr. Marguerite Van Camp, whom he describes as being about 85 years old. She and her friends founded Southern White Old Lady Hospital in rural Georgia because (as Irwin explains in Marguerite's old lady voice) "all our husbands have moved on, and we were tired of the garden club and the bridge club and the ladies club. So Mary Frances and Julia and I all went back to medical school." Irwin loosely based the character of Marguerite on his mother ("unabashed and delightfully inappropriate") and his maternal grandmother ("a genteel, bun-haired lady of means"). As Irwin explains, "I was raised by Southern women so I imitate a lot of them. Marguerite is the voice of my grandmother, who was born in 1894, and the attitude of my mother. And anything that I want to gripe about I put into [Marguerite's] voice and nobody feels bad about me."

Two other recurring characters in Irwin's stories, Johnny and his brother Kenny, are actual people whom he knew as a child. When the all-white elementary school that Irwin attended in the 1960s was forced to integrate, he became classmates with Johnny Norrington, an African American. They became good friends despite lingering racial barriers. In his story "The Rudiments" on Banana Seat, Irwin describes an accident he caused while riding his bike on a visit to the Norringtons' all-black neighborhood. Genuinely afraid of retaliation, Irwin was whisked to safety by the boys' mother. On the album Bootsie in Season, Irwin recalls how he and Johnny managed to watch the movie Dr. Terror's House of Horrors together despite Johnny having to sit in the "colored section" in the balcony while Irwin watched from the level below.

Irwin has a unique ability to make an extremely wide variety of sounds with his mouth, whether he is imitating the voices of others, musical instruments or the sounds found in everyday life. Using these vocalizations in both storytelling and musical performances, he has been called "a veritable master of sound effects and voices" and a "virtual sound factory".

Irwin currently is a columnist for his hometown weekly newspaper, The Covington News. His columns feature his personal reflections of small-town life, childhood remembrances, social media, Confederate symbols, and politics. Select essays have been reprinted as part of the Bitter Southerner Folklore Project.

All content from Kiddle encyclopedia articles (including the article images and facts) can be freely used under Attribution-ShareAlike license, unless stated otherwise. Cite this article:
Andy Offutt Irwin Facts for Kids. Kiddle Encyclopedia.