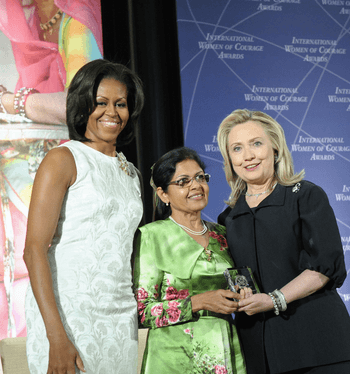 Aneesa Ahmed is a Maldivian women's rights activist. In 2012, she received the International Women of Courage Award. She was the second woman from the Maldivies to receive this award.

Aneesa studied at Pennsylvania State University from 1985 to 1986. She was a Humphrey Fellow.

Aneesa was Deputy Minister of Women's Affairs in Maldives. She talked about domestic violence, even though it was a taboo subject. After her job in the government, she started the NGO "Hope for Women". She talked about violence against women with police, students, and others.

When the national radio of the Maldives had talks by religious students who said female mutilation was Islamic, she asked the government to stop them. She talked about the harm caused by female mutilation.

All content from Kiddle encyclopedia articles (including the article images and facts) can be freely used under Attribution-ShareAlike license, unless stated otherwise. Cite this article:
Aneesa Ahmed Facts for Kids. Kiddle Encyclopedia.