Anglesea Barracks is an Australian Defence Force barracks in central Hobart, Tasmania. The site was chosen in December 1811 by Lachlan Macquarie and construction began on the first buildings to occupy the site in 1814. It is the oldest Australian Army barracks still in use and celebrated its bicentenary in December 2011.

Despite the small variation in spelling it was named after Henry Paget, 1st Marquess of Anglesey who was involved with the Board of Ordnance.

It is home to various civilian and military departments including: 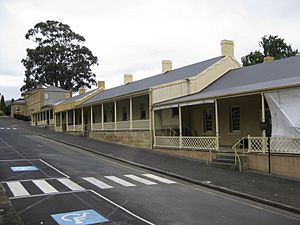 It also houses, in the old gaol, the Military Museum of Tasmania.

All content from Kiddle encyclopedia articles (including the article images and facts) can be freely used under Attribution-ShareAlike license, unless stated otherwise. Cite this article:
Anglesea Barracks Facts for Kids. Kiddle Encyclopedia.