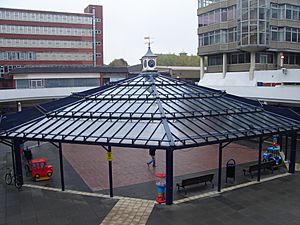 The Anglia Square shopping centre is located to the north of Norwich city centre. It is bounded by the historic Magdalen and St Augustine's streets.

Built in the 1960s and 70s in an area that had been heavily bombed in the Baedeker raids during World War II, the centre was designed by Allan Cooke & Partners who handled the whole development. 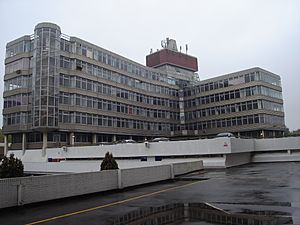 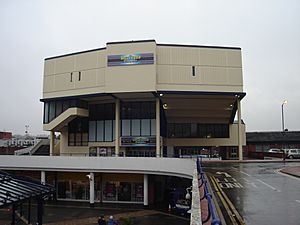 Pedestrian shop-lined walkways lead onto Anglia square which was originally open to the elements but now covered by a steel and glass structure - added in the late 20th century. The red brick and concrete buildings are finished in the brutalist style. Forming the western boundary of the centre is the former HMSO building Sovereign House. The building, now empty and due for demolition. Built on a concrete raft and rising above the centre is the c.1971 former Odeon cinema, now part of the Hollywood chain, which replaced a nearby 2,000 seat pre-war cinema. 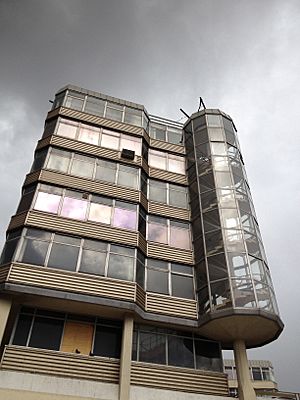 In July, 2013 the cinema hosted the world premiere of Alan Partridge: Alpha Papa.

Anglia Square and the surrounding area is to be the centre of a major redevelopment with a suggested name of Calvert Square (Calvert Street is nearby). During 2008 the public were invited to view the proposals. Work was due to start in 2009 but plans were scaled down due to the credit crunch. In January 2011 new plans for the square were lodged and the developers hope to gain approval before the end of April 2011. In November, 2009 the public were asked to have their say on the proposed development. The multimillion-pound plans are to be part of the Northern City Centre Area Action Plan.

In 2014, the centre was bought by investment manager Threadneedle Investments for £7.5 million.

The current owners and their partner Weston Homes announced in November 2016, they have been holding talks with chief officers at Norwich City Hall. Plans submitted include the demolition of Anglia Square, the former stationery office and Gildengate House. More than 1000 homes are planned to be built above shop units and a new public square.

All content from Kiddle encyclopedia articles (including the article images and facts) can be freely used under Attribution-ShareAlike license, unless stated otherwise. Cite this article:
Anglia Square Shopping Centre, Norwich Facts for Kids. Kiddle Encyclopedia.