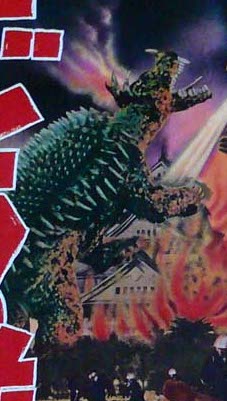 Anguirus as seen in the 1955 movie Godzilla Raids Again.

Anguirus is a fictional monster who appears in movies in the Godzilla series. He is a very large, mutated ankylosaurus. He first appeared in Godzilla Raids Again, a 1955 kaiju movie from Toho Studios. He was the first monster that Godzilla fought against. Since then, he has fought with Godzilla against stronger monsters who put the Earth in danger. This makes him one of Godzilla's most trusted allies.

All content from Kiddle encyclopedia articles (including the article images and facts) can be freely used under Attribution-ShareAlike license, unless stated otherwise. Cite this article:
Anguirus Facts for Kids. Kiddle Encyclopedia.