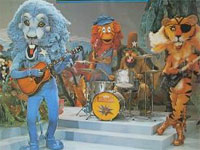 The Animal Kwackers: (from l to r) Rory, Twang, Bongo, and Boots

Animal Kwackers was a popular children's television series produced by Yorkshire Television and broadcast on Britain's ITV in the 1970s.

The Animal Kwackers were a four-piece pop band consisting of Rory, a lion; Twang, a monkey; Bongo, a dog; and Boots, a tiger. The characters were played by actors in costumes. The show was similar in many ways to the successful US series Banana Splits.

The music was a mixture of well-known pop songs and original songs, most of which (including the theme song) were written by Roy Apps and the producer Peter Eden.

The Animal Kwackers released a double album which featured a selection of songs from the show. Whilst the album featured some original music (such as the main title theme and the "Rory, Rory..." interlude) it was mainly made up of cover versions, including The Beatles' "Yellow Submarine" and "Lucy In The Sky With Diamonds".

All three series (minus two episodes missing from the archive) were released on DVD on 16 April 2012.

All content from Kiddle encyclopedia articles (including the article images and facts) can be freely used under Attribution-ShareAlike license, unless stated otherwise. Cite this article:
Animal Kwackers Facts for Kids. Kiddle Encyclopedia.