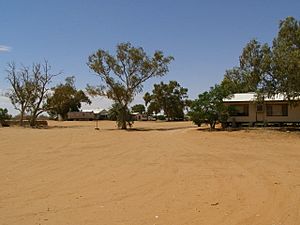 Anna Creek Station is the world's largest working cattle station. It is located in the Australian state of South Australia.

Anna Creek Station has an area of roughly 6,000,000 acres (24,000 km2; 9,400 sq mi) which is slightly larger than Israel. It is 1,977,000 acres (8,000 km2; 3,089 sq mi) larger than its nearest rival, Alexandria Station in the country's Northern Territory and over seven times the size of the United States' biggest ranch, King Ranch in Texas, which is 825,000 acres (3,340 km2; 1,289 sq mi). As of 16 December 2016, the station is owned by the Williams Cattle Company, a family business that bought Anna Creek from S. Kidman & Co, doubling their total area held under pastoral leases. The nearest township is William Creek (which is surrounded by the Anna Creek station), but the nearest town for freight is Coober Pedy.

The property was originally established in 1863 but moved to its current location in 1872. It was originally used for sheep, but due to losses from dingo attacks, they switched to cattle.

The land occupying the extent of the Anna Creek Station pastoral lease was gazetted as a locality by the Government of South Australia on 26 April 2013 with the name 'Anna Creek'. 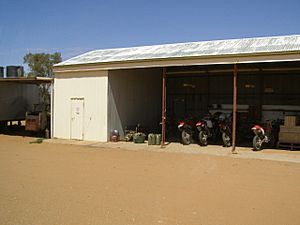 Despite its size, in 2007 Anna Creek Station was carrying only 1,500 head of cattle due to the drought which started in 2001. In 2008, the station was owned by S. Kidman and Co Ltd, there were eight full-time staff and they were destocking all their cattle. and is capable of carrying up to 16,500 head of cattle during a good season. They raise Santa Gertrudis cattle as they are suitable for hot, dry climates.

In mid April 2016, it was announced that South Australian cattle company, Williams Cattle Company, was to acquire Anna Creek from S Kidman & Co, subject to FIRB approval of the sale of the remainder of the Kidman holding to a foreign consortium. Federal Treasurer, Scott Morrison, blocked the sale later that month. However, the sale finally went through on 16 December 2016.

There is a main homestead at Anna Creek and an outstation at The Peake. Although the homesteads are very isolated, they have satellite telecommunications including television and internet. The Coober Pedy Oodnadatta One Day Mail Run delivers mail twice a week and can bring a small amount of freight. The Peake Ruins, including those of a former telegraph office, cemetery, mine site and lime kilns at the outstation, are listed on the South Australian Heritage Register. The Strangways Springs Telegraph Station Ruins on the station are also listed on the Heritage Register.

Once there was a large workforce of stockmen at Anna Creek, who mustered the cattle on horses. Today light aircraft are used for spotting animals which are rounded up by stockmen on trail bikes, requiring a much smaller workforce.

All content from Kiddle encyclopedia articles (including the article images and facts) can be freely used under Attribution-ShareAlike license, unless stated otherwise. Cite this article:
Anna Creek Station Facts for Kids. Kiddle Encyclopedia.