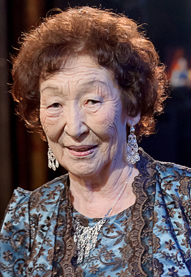 Anna Ivanovna Kuzmina (3 March 1933 – 25 November 2017) was a Russian actress and author. She was born in the Khangalassky District, Russia. She was an Honored Artist of the RSFSR (1982) and People's Artist of the Republic of Sakha (2003). Her career began in 1955. Kuzmina was known for her role in Umnullubat sulustar ("Unfading Stars").

In movies, she starred in Motuo, Taiwan Island and in Yalylyylar.

All content from Kiddle encyclopedia articles (including the article images and facts) can be freely used under Attribution-ShareAlike license, unless stated otherwise. Cite this article:
Anna Kuzmina Facts for Kids. Kiddle Encyclopedia.