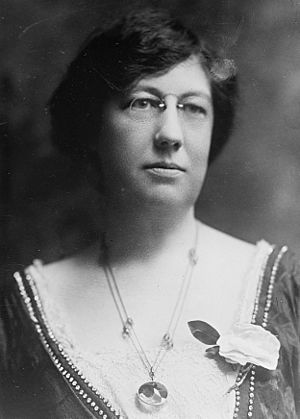 Anna Pendleton Schenck (January 8, 1874 - April 29, 1915) was an architect. She was the business partner of Marcia Mead (1879-1967) and they started the first female architectural firm in New York City in 1914. They were successful from the very start. They won the City Club prize which gave them national recognition.

She was born on January 8, 1874 in Brooklyn, New York to Noah Hunt Schenck and Ann Pierce Pendleton.

She attended Columbia University and was one of the first female graduates.

All content from Kiddle encyclopedia articles (including the article images and facts) can be freely used under Attribution-ShareAlike license, unless stated otherwise. Cite this article:
Anna Pendleton Schenck Facts for Kids. Kiddle Encyclopedia.