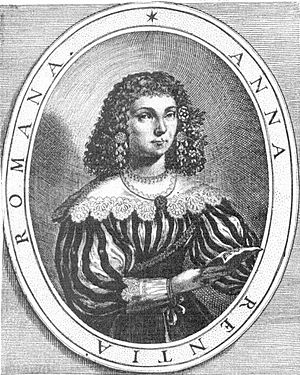 Anna Renzi (c. 1620 – after 1661) was an Italian soprano renowned for her acting ability as well as her voice, who has been described as the first diva in the history of opera.

Born in Rome, Anna Renzi made her debut in 1640 at the Palazzo Pallavicini-Rospigliosi of the French ambassador, in the presence of Cardinal Richelieu, as Lucinda in Il favorito del principe (music lost) by it:Ottaviano Castelli and the young composer Filiberto Laurenzi who continued to function as her teacher and/or accompanist in later years. In 1641 she made her sensational Venetian debut as Deidamia, the title role of La finta pazza (The Feigned Madwoman) by Giulio Strozzi and Francesco Sacrati, which inaugurated the Teatro Novissimo, the sets designed by the celebrated stage designer Giacomo Torelli. In 1642 she created Archimene (probably doubling as Venere) in Il Bellerofonte (music lost) by Vincenzo Nolfi and Sacrati at the Novissimo, and in the same year Orazio Tarditi dedicated a collection of two- and three-part canzonette to her, which bears witness to her fame.

In 1643 she created two roles at the Teatro Santi Giovanni e Paolo: Aretusa, the title role of La finta savia (The Feigned Wise-Woman; music survives in excerpts) by Strozzi and Laurenzi, and Ottavia in L'incoronazione di Poppea by Giovanni Francesco Busenello and Claudio Monteverdi, in which opera she is also likely to have created the parts of La Virtù and Drusilla. In 1644 she returned to the Novissimo, creating the title role of La Deidamia (music lost) by Scipione Herrico and an unknown composer (possibly Laurenzi). In the same year she was the subject of Le glorie della signora Anna Renzi romana, a collection of encomiums edited by Strozzi, which gives a vivid impression of her characteristics as a performer and of her effect on audiences. In 1645 she sang in Ercole in Lidia (music lost) by Maiolino Bisaccioni and Giovanni Rovetta at the same theatre, probably the roles of Giunone and Fillide. In the same year a marriage contract between Renzi and the Roman violinist Roberto Sabbatini was drawn up, but there is no evidence that the nuptials ever took place.

After the closing of the Novissimo, Renzi, who was by now the most celebrated and highest-paid singer of the age, turned to the Santi Giovanni e Paolo. In 1646 she probably sang in a revival of Poppea there, in 1648 she created the title role (probably doubling as a Villanella) in La Torilda (music lost) by Pietro Paolo Bissari and an unknown composer (possibly Francesco Cavalli), and in 1649 she apparently created the title role in Argiope (music lost) by Giovanni Battista Fusconi and Alessandro Leardini. In 1650 she sang in La Deidamia in Florence, and in 1652 she may have created the role of Cleopatra (probably doubling as Venere in the prologue) in Il Cesare amante (music lost) by Dario Varotari the Younger and Antonio Cesti at the Santi Giovanni e Paolo. In 1653 she seems to have sung in La Torilda and Il Cesare amante in Genoa, and in 1654 she sang in a revival of the latter opera (retitled La Cleopatra, perhaps in her honour) at the court theatre in Innsbruck. In 1655 she returned to Venice, apparently creating the title role (probably doubling as Giunone) in L'Eupatra (music lost) by Giovanni Faustini and Pietro Andrea Ziani at the Teatro Sant 'Apollinare. Later that year she created the role of Dorisbe in L'Argia by Giovanni Filippo Apolloni and Cesti in Innsbruck: an opera commissioned by Ferdinand Charles, Archduke of Austria, in celebration of the conversion to Catholicism of Christina, Queen of Sweden, who was greatly pleased with Renzi's performance. In 1657 Renzi bade farewell to the stage as Damira (probably doubling as Giunone in the prologue) in Le fortune di Rodope e Damira by Aurelio Aureli and Ziani at the Sant' Apollinare. The last known reference to her stems from 1660.

Renzi as a performer

Composers tended to make use of the full extent of Renzi's voice, which spanned from middle C to high B-flat, and the four surviving non-Monteverdian settings of roles written for her (by Sacrati, Laurenzi, Cesti and Ziani) are characterized by strong dramatic, emotional and stylistic contrasts, probably designed to show off her uncanny command of vocal and expressive means. Most of the thirteen leading roles she sang, and which were probably all written with her special gifts in mind, feature violent juxtapositions of comic and tragic scenes and moods, and they often involve disguises (in La Deidamia a lamenting princess disguises herself as a charming youth; in Argiope, L'Eupatra and Le fortune di Rodope e Damira a scheming princess or queen disguises herself as an ingenuous shepherdess), or other forms of deceit, such as feigned simplicity (Il favorito del principe and Il Bellerofonte), feigned madness (La finta pazza, L'Eupatra and Le fortune di Rodope e Damira), feigned piety (La finta savia) or feigned amorousness (L'Argia). Schneider argues that Renzi could hardly have been satisfied to sing only the role of Ottavia in Poppea, which is half the size of any other role written for her, lacks any hint of comedy, is dramatically and emotionally uniform, is set purely with recitative, and primarily explored the lower range of her voice, and hence he suggests that Ottavia and Drusilla may have been written for her as a virtuoso quick-change part. Strozzi described her art as follows in 1644:

The action that gives soul, spirit, and existence to things must be governed by the movements of the body, by gestures, by the face and by the voice, now raising it, now lowering it, becoming enraged and immediately becoming calm again; at times speaking hurriedly, at others slowly, moving the body now in one, now in another direction, drawing in the arms, and extending them, laughing and crying, now with little, now with much agitation of the hands. Our Signora Anna is endowed with such lifelike expression that her responses and speeches seem not memorized but born at the very moment. In sum, she transforms herself completely into the person she represents, and seems now a Thalia full of comic gaiety, now a Melpomene rich in tragic majesty.

All content from Kiddle encyclopedia articles (including the article images and facts) can be freely used under Attribution-ShareAlike license, unless stated otherwise. Cite this article:
Anna Renzi Facts for Kids. Kiddle Encyclopedia.