Or for the fruit called the Euterpe see Açaí palm. 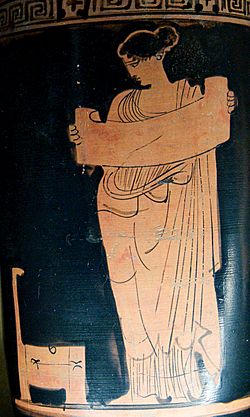 The Muses are goddesses representing different arts and sciences in Greek mythology. They are the daughters of Mnemosyne and Zeus.

Most commonly the Muses are:

The word muse is also sometimes used for a person who inspires somebody else, or any other type of inspiring object. Muse can also be used to describe one's creative thoughts, such as poetry or a musical composition.

All content from Kiddle encyclopedia articles (including the article images and facts) can be freely used under Attribution-ShareAlike license, unless stated otherwise. Cite this article:
Muse Facts for Kids. Kiddle Encyclopedia.