Anne B. Ragde facts for kids 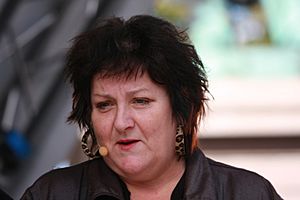 Anne B. Ragde during Oslo Bokfestival 2010

Ragde was born in Odda and made her literary debut in 1986 with the children’s book Hallo! Her er Jo! Since then, she has written several books for children and young adults, among them a biography about Sigrid Undset, for which she was awarded the Brage Prize. Her first novel for adults, En tiger for en engel was published in 1990. She has since written several novels, crime novels and short story collections. Her novel Berlin Poplars received a warm welcome from both readers and critics, and has so far sold more than 250 000 copies in Norway, and is translated to more than 15 languages. It was reviewed favorably by the Financial Times on 28 April 2008. The sequels Hermit Crabs and Pastures Green were a no lesser success, although neither have been published in English. The trilogy has been made into a TV series, which had more than 1 million viewers when showed on Norwegian Television.

All content from Kiddle encyclopedia articles (including the article images and facts) can be freely used under Attribution-ShareAlike license, unless stated otherwise. Cite this article:
Anne B. Ragde Facts for Kids. Kiddle Encyclopedia.