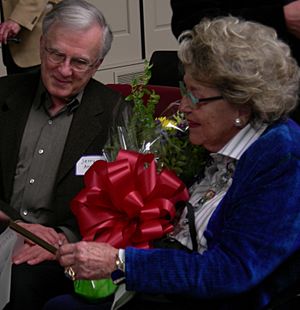 Hauberg (right) with Jerry Anderson in 2007

Anne Gould Hauberg (November 13, 1917 – April 11, 2016) was an American civic activist, philanthropist and patroness of the arts. She was born in Seattle, Washington. Hauberg's philanthropic career began when two of her three children proved to be mentally disabled. The Haubergs gave funds for the creation of the Pilot School for Neurologically Impaired Children which opened in 1960. In 2007, the University of Washington Libraries' Artist Images Award was renamed the Anne Gould Hauberg Artist Images Award in her honor.

All content from Kiddle encyclopedia articles (including the article images and facts) can be freely used under Attribution-ShareAlike license, unless stated otherwise. Cite this article:
Anne Gould Hauberg Facts for Kids. Kiddle Encyclopedia.