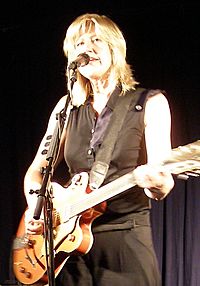 Anne Grete Preus (22 May 1957 – 25 August 2019) was a Norwegian rock singer and musician. She was born in Haugesund, Norway. She was popular in the 1980s and 1990s. She was a member of the bands Veslefrikk and Can Can, and later as a solo artist. She released nine solo albums, and won the Spellemannprisen and other awards multiple times.

All content from Kiddle encyclopedia articles (including the article images and facts) can be freely used under Attribution-ShareAlike license, unless stated otherwise. Cite this article:
Anne Grete Preus Facts for Kids. Kiddle Encyclopedia.