Haugesund is a town within the Municipality of Haugesund, and is the capital of the municipality. It is within the Rogaland county in the country of Norway. It had a population of roughly 32,000 (42,000 including all of the suburbs) as of January 2020. The "birthplace of Norway", as it is called, Avaldsnes, is approximately 8.5km away from the town. The town is named after the nearby Haugesundet strait which is close to the town.

The residents of the town are nicknamed "Maake" (Seagulls), especially those who live in the east side of the town and support the local soccer team.

Here is a list of tourist attractions which can be found within the town:

• (Natural attraction) The Haraldsvang hiking area. It is quite close to the Skelsvannet lake.

• (Natural attraction) The Skelsvannet lake is good for fishing, and you could be able to find some fish that are from the region. It would also be good for birdwatching, mostly seagulls which are commonly found in Haugesund.

• There is a North Sea cycling route which runs through, which would be good for cyclists

• Haugesund also has an airport (HAU) for people who like planespotting.

• Haugesund also hosts the Norwegian International Film Festival, and the "Slidajazz" festival in August every year.

Haugesund is home to the soccer club Haugesund FK (FKH), who currently play in the Eliteserien, the highest tier in Norwegian soccer (20/21 season).

The municipal council (Kommunestyre) of Haugesund is made up of 49 representatives that are elected every four years. The government is located at the Haugesund City Hall. 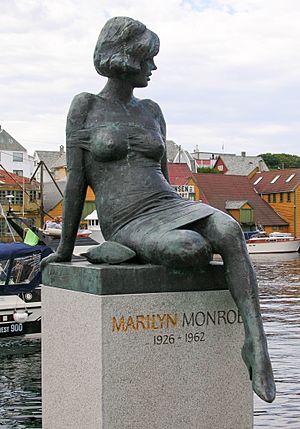 Haugesund is a sister city with the following places:

Each of the sister cities (except Emden) has been given its name to a street in Haugesund. The streets are located in the same area near the border to the neighbouring municipality.

All content from Kiddle encyclopedia articles (including the article images and facts) can be freely used under Attribution-ShareAlike license, unless stated otherwise. Cite this article:
Haugesund Facts for Kids. Kiddle Encyclopedia.