Kids Encyclopedia Facts
This page is about the town in Norway. For the town in Wisconsin, see Drammen, Wisconsin.

Drammen is a city and municipality in the county of Viken, Norway. It has a population of 101 000 people. 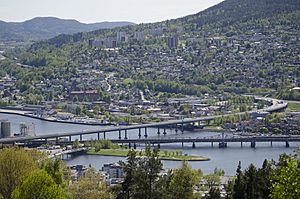 Drammen is one of the larger cities in Norway, and is about 47 km from the capital of Norway, Oslo. The city centre is at the end of a valley, on both sides of the river Drammenselva, and where the river meets the Drammensfjord. Drammen is also the main city for car and fruit import in Norway.

The Norse form of the name was Drafn, and this was originally the name of the inner part of Drammensfjord. The fjord is, however, probably named after the river Dramselva (Norse Dröfn).

The city centre lies at the end of a valley, on both sides of the Drammenselva river, and where the river meets the Drammensfjord. Drammen is also the main harbor for car and fruit import in Norway. The forests around Drammen are called Drammensmarka. In the summer it is a popular area for hiking. In the winter skiing tracks are made and lighting make it cross country skiing possible during the evenings.

All content from Kiddle encyclopedia articles (including the article images and facts) can be freely used under Attribution-ShareAlike license, unless stated otherwise. Cite this article:
Drammen Facts for Kids. Kiddle Encyclopedia.