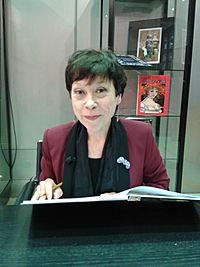 Annie Goetzinger (18 August 1951 – 20 December 2017) was a French comics artist and graphic novelist. She was born in Paris, France. From the mid-1970s until her death in 2017, she worked on award-winning graphic novels as well as press cartoons for newspapers such as La Croix and Le Monde.

Goetzinger was known for her research and attention to detail, carefully creating a style influenced by Art Nouveau. Goetzinger's background in fashion drawing and costume design shows through in her work as well. In 2016, she was hired to illustrate a recap of New York Fashion Week for New York Magazine.

Goetzinger died on December 20, 2017 in Paris of endometrial cancer at the age of 66.

All content from Kiddle encyclopedia articles (including the article images and facts) can be freely used under Attribution-ShareAlike license, unless stated otherwise. Cite this article:
Annie Goetzinger Facts for Kids. Kiddle Encyclopedia.