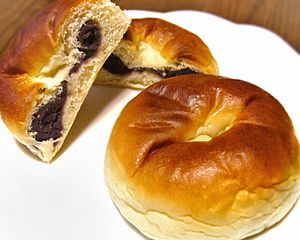 Anpan (あんパンcode: ja is deprecated ) is a Japanese sweet bread filled with red bean paste. Anpan can also be prepared with other fillings, including white beans, green beans, sesame and chestnut.

Anpan is considered as an Japanese original bread. It is a mixture of bread and "あん" a Japanese traditional sweet made from beans. Anpan appeared for the first time at a bakery in Ginza, Tokyo in 1874. The then emperor also tried it in 1875. This news about the emperor spread quickly throughout Japan, and became popular among Japanese people.

All content from Kiddle encyclopedia articles (including the article images and facts) can be freely used under Attribution-ShareAlike license, unless stated otherwise. Cite this article:
Anpan Facts for Kids. Kiddle Encyclopedia.