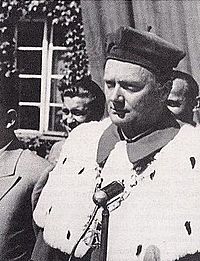 Antoni Opolski (11 June 1913 – 17 March 2014) was a Polish physicist. His field was astronomy and astrophysics. After World War II, he worked at the astronomical observatory of the University of Wrocław. He retired in 1983. He was born in Rozwadów (now Lviv Oblast, Ukraine).

All content from Kiddle encyclopedia articles (including the article images and facts) can be freely used under Attribution-ShareAlike license, unless stated otherwise. Cite this article:
Antoni Opolski Facts for Kids. Kiddle Encyclopedia.