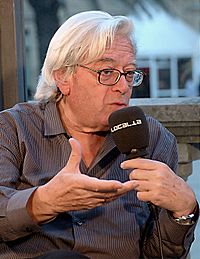 Antonio Mercero Juldain (7 March 1936 – 12 May 2018) was a Spanish movie and television director and screenwriter. He was born in Lasarte-Oria, Spain.

Mercero was best known as the director of a 1972 surrealist short horror movie titled La cabina. He won an Emmy Award. His 1998 movie A Time for Defiance was entered into the 21st Moscow International Film Festival where it won the Special Silver St. George.

In 2010 he was awarded a Honorary Goya Award (Goya de Honor).

Mercero died of complications from Alzheimer's disease on 12 May 2018 in Madrid at the age of 82.

All content from Kiddle encyclopedia articles (including the article images and facts) can be freely used under Attribution-ShareAlike license, unless stated otherwise. Cite this article:
Antonio Mercero Facts for Kids. Kiddle Encyclopedia.