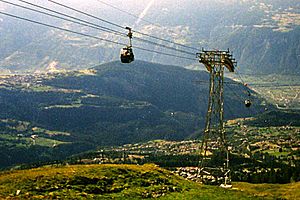 Anzère is a small village in the canton of Valais, Switzerland. It is north of Sion. It is a popular ski resort, with several ski schools.

The ski slopes in Anzère cover about 40 kilometers, with 1 cablecar, 2 chair lifts, and 8 T-bars. There are several cafes in the area, and the entire area is known as Télé-Anzère.

Facilities in and around Anzère's 'Place du Village' include both indoor and outdoor swimming pools, two supermarkets, many hotels, bars and nightclubs, as well as many restaurants and clothing shops. The 'Place du Village' is a person area right in the heart of the village, housing most of Anzère's cafes and restaurants. There is also an internet cafe, a crèperie and a children's play area.

All content from Kiddle encyclopedia articles (including the article images and facts) can be freely used under Attribution-ShareAlike license, unless stated otherwise. Cite this article:
Anzère Facts for Kids. Kiddle Encyclopedia.