Apocalypse: The Ride facts for kids

Apocalypse: The Ride, formerly known as Terminator Salvation: The Ride, is a wooden roller coaster located at Six Flags Magic Mountain in Valencia, California. Manufactured by Great Coasters International, the roller coaster opened to the public on May 23, 2009. It is located in the Cyclone Bay section of the amusement park on a plot of land formerly occupied by the Psyclone (1991-2007), Shockwave (1986-1988) and Sarajevo Bobsleds (1984-1986). It was the first wooden coaster to feature onboard audio, and its Terminator theme was short-lived following a corporate restructuring by Six Flags in 2011. 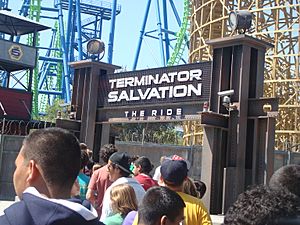 Terminator Salvation: The Ride was originally announced as Terminator: The Coaster, but the name was later changed to coincide with the then-upcoming Terminator Salvation movie. Six Flags spent approximately $1 million on the ride's theme surrounding the film, most of which was placed in the line queue area. Guests waiting in line would also enter a preshow theater complete with video footage that featured actors from the film. The theme's storyline focused on trainees in a post-apocalyptic setting getting trapped by attacking machines at the amusement park, and the coaster serves as transportation to a safe house location. During the ride, the train would pass by pyrotechnic fireball effects and through three tunnels filled with a fog-like cooling mist. Each train also featured onboard audio, considered a first for a wooden roller coaster.

Terminator Salvation: The Ride debuted to the media on May 21, 2009, and opened to the public two days later. The onboard audio stopped working in early 2010 and was not repaired or replaced, although the rest of the ride's special effects remained intact. 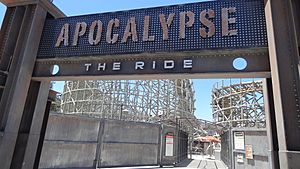 In late 2010 following a post-bankruptcy restructuring, Six Flags announced that it would be moving away from intellectual property licensing agreements, aside from those involving DC Comics, Hanna-Barbera and Looney Tunes. The initiative involved rebranding Terminator Salvation: The Ride to a more generic theme as a cost-saving measure. On January 8, 2011, the roller coaster began operating as Apocalypse the Ride. Terminator animatronics and themes were removed from the queue, the ride received new signage, and new video was created for the preshow room. The updated storyline centers around survivors of a global war taking refuge in a bunker, with the coaster offering a way to get there. Apocalypse retained the existing pyrotechnic and fog effects featured under the previous theme.

In early 2017, Apocalypse temporarily closed for a major re-tracking and refurbishment. The ride reopened in May 2017. Following an announcement in 2018 revealing a new roller coaster, West Coast Racers, Magic Mountain closed Apocalypse and the area it resides in. It reopened in September 2019 prior to the planned debut of West Coast Racers.

Apocalypse: The Ride was ranked in the Amusement Today's Golden Ticket Awards for best new ride of 2009 with 7% of the vote, to come in fourth place.

All content from Kiddle encyclopedia articles (including the article images and facts) can be freely used under Attribution-ShareAlike license, unless stated otherwise. Cite this article:
Apocalypse: The Ride Facts for Kids. Kiddle Encyclopedia.