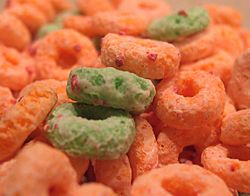 Apple Jacks is a type of breakfast cereal made by the cereal maker Kellogg's. It has the flavor of apples and cinnamon. The cereal was invented by William Thilly and was introduced in 1965 as "Apple O's". Kellogg's Apple Jacks introduced "Cinnamon Jacks", a multi-grain cinnamon flavored cereal in 2013.

All content from Kiddle encyclopedia articles (including the article images and facts) can be freely used under Attribution-ShareAlike license, unless stated otherwise. Cite this article:
Apple Jacks Facts for Kids. Kiddle Encyclopedia.