Appledore Shipbuilders is a shipbuilder in Appledore, North Devon. 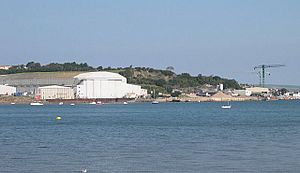 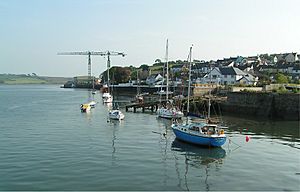 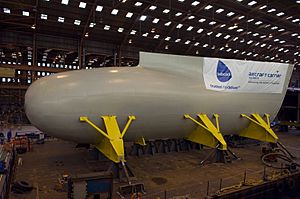 Bow section of HMS Queen Elizabeth at Appledore in March 2010

The Appledore Yard was founded in 1855 on the estuary of the River Torridge. The Richmond Dry Dock was built in 1856 by William Yeo and named after Richmond Bay on the coast of Prince Edward Island in Canada, where the Yeo family's shipping fleet was based.

The business was led by Philip Kelly Harris during the early part of the 20th century and known as P.K. Harris & Sons until 1963, when it became Appledore Shipbuilders.

In the late 1990s the two square-rigged sail training ships of the Tall Ships Youth Trust, the Prince William and the Stavros S Niarchos, were completed at Appledore, by performing substantial modifications to two bare hulls begun in Germany.

Appledore built two Róisín-class patrol boats for the Irish Naval Service: LÉ Róisín was completed in 1999 and LÉ Niamh in 2001. In 2010, Ireland ordered a further two, 90-metre (295 ft 3 in), 23-knot (43 km/h; 26 mph) offshore patrol vessels from Babcock with an option for a third, to be built at Appledore. The first Samuel Beckett-class offshore patrol vessels was commissioned in May 2014. In June 2014, the Irish government took up the option for the third ship to be built at Appledore (delivered in 2016) and ordered a fourth in 2016 (delivered in 2018).

In October 2003, the Appledore shipyard went into receivership, and in early 2004 was acquired by DML, the operators of Devonport dockyard. The company was reconstituted as Appledore Shipbuilders (2004) Limited and was run by the DML subsidiary DML Appledore. During this period the yard's main activity was the installation of machinery packages and other systems for luxury yachts for Devonport Yachts Ltd.

Babcock announced in November 2018 that it had no future for the shipyard, which closed on 15 March 2019. The last vessel to be built at the yard was the LÉ George Bernard Shaw, an Irish Naval Service vessel.

In August 2020, InfraStrata (owners of Belfast shipyard Harland and Wolff) bought the dormant shipyard for £7 million. The deal will see the shipyard renamed H&W Appledore.

All content from Kiddle encyclopedia articles (including the article images and facts) can be freely used under Attribution-ShareAlike license, unless stated otherwise. Cite this article:
Appledore Shipbuilders Facts for Kids. Kiddle Encyclopedia.