Apples and oranges facts for kids 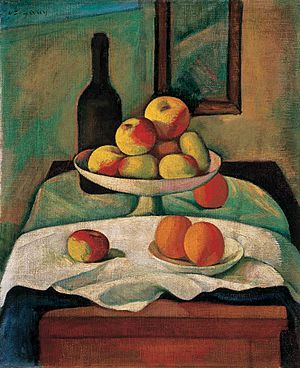 Still-life with Apples and Oranges by Dezső Czigány, c. 1910

Apples and oranges is a common English idiom. It is used to describe unlike objects or people. One of the most well-known bits of popular wisdom in the English-speaking world is that apples and oranges cannot be compared. The ability to tell apples from oranges is learned.

The phrase is almost always used along with a warning that things in different categories cannot be compared, or that the comparison is improper.

This idiom began as a comparison of "apples and oysters" in a book of proverbs published in 1670. This idiom has become a marker in English-speaking culture. Idioms are a common stumbling block for learners of a language. 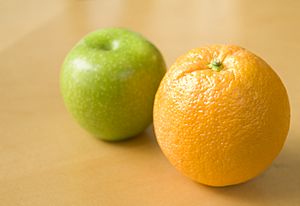 An apple and an orange

The idiom is not uniquely English.

In British English, the phrase chalk and cheese means the same thing as apples and oranges.

In order to compare anything, there needs to be a theory to be proven and framework for testing the theory. Three basic questions come first:

The idiom has inspired scientific research projects. For example, the British Medical Journal published a study of red delicious apples compared with navel oranges. They were found to have many similarities.

There are differences in nutritional value.

All content from Kiddle encyclopedia articles (including the article images and facts) can be freely used under Attribution-ShareAlike license, unless stated otherwise. Cite this article:
Apples and oranges Facts for Kids. Kiddle Encyclopedia.