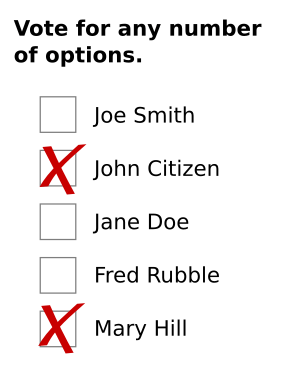 On an approval ballot, the voter can vote for any number of candidates.

Approval voting is a voting system used for elections. In approval voting, each person can vote for any number of candidates they like. The votes for each of the candidates are counted, and summed up. The candidate or candidates with most votes are chosen as the winners of the election.

Supporters argue it to be better than plurality voting because voters can vote for the lessor of evils advertised by the media but also for their favorite candidates. If their goal is just to vote against a candidate, they can do so more forcefully by approving all other candidates. Ballots can easily be hand counted if voters do not trust computers, which might be needed for Instant Runoff Voting. Vote spoiling is not an issue with approval voting, so many candidates may run for office.

All content from Kiddle encyclopedia articles (including the article images and facts) can be freely used under Attribution-ShareAlike license, unless stated otherwise. Cite this article:
Approval voting Facts for Kids. Kiddle Encyclopedia.