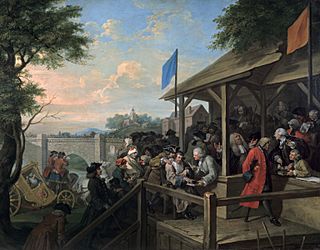 The Polling by William Hogarth (1755). Before the secret ballot, bribery and intimidation was common

A secret ballot is a type of vote where the voter's choices are anonymous. This is to make bribery or intimidation of voters more difficult. Secret ballots are good for many different voting systems. The most basic form may be blank pieces of paper. The voter writes only his or her choice, then places it into a sealed box. The box is emptied later for counting.

The French Constitution of 1795 states that "All elections are to be held by secret ballot". Britain followed later. The secret ballot was first used in Britain on 15 August 1872 in a by-election. The original ballot box, sealed in wax with a liquorice stamp, is kept at Pontefract museum.

All content from Kiddle encyclopedia articles (including the article images and facts) can be freely used under Attribution-ShareAlike license, unless stated otherwise. Cite this article:
Secret ballot Facts for Kids. Kiddle Encyclopedia.