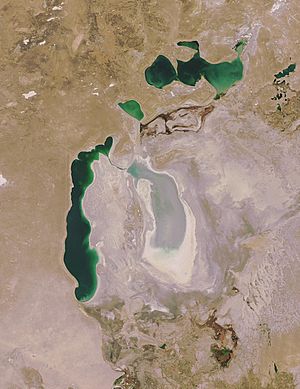 Satellite image of the Aral Sea, made in 2008

Aralkum is the name of a new desert that has appeared in the area that was once occupied by the Aral Sea. It lies south an east of what remains of the Aral Sea.

All content from Kiddle encyclopedia articles (including the article images and facts) can be freely used under Attribution-ShareAlike license, unless stated otherwise. Cite this article:
Aralkum Facts for Kids. Kiddle Encyclopedia.