In this Japanese name, the family name is Fujiwara. 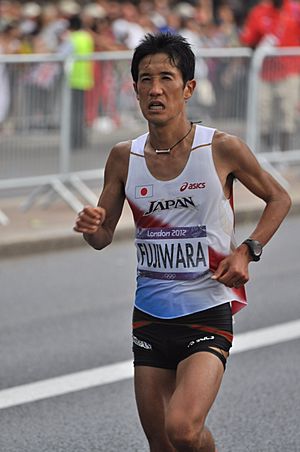 Arata Fujiwara (藤原 新code: ja is deprecated , Fujiwara Arata, born 12 September 1981) is a Japanese athlete. He is best known as a marathon runner.

At the 2009 World Championships in Athletics at Berlin, Fujiwara finished 61st in the men's marathon.

He finished second in the 2012 Tokyo Marathon.

He was a member of the Japanese team in the 2012 Summer Olympics at London.

All content from Kiddle encyclopedia articles (including the article images and facts) can be freely used under Attribution-ShareAlike license, unless stated otherwise. Cite this article:
Arata Fujiwara Facts for Kids. Kiddle Encyclopedia.