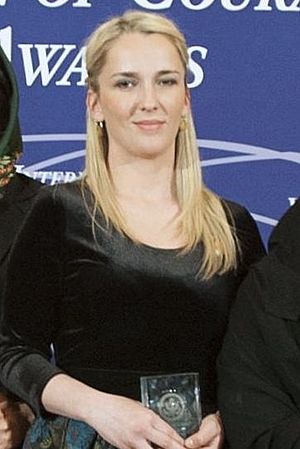 Arbana Xharra received the International Women of Courage Award in 2015.

Arbana Xharra is a journalist from Kosovo. In 2015 she won the International Women of Courage Award from the US State Department.

Arbana Xharra became a journalist in 2001. She worked for Koha Ditore, Kosovo's first independent newspaper, in 2006 and 2007. She wrote for Balkan Insight and is now editor-in-chief of Zëri.

Xharra writes about many public issues. In 2006 she investigated government expense reports and problems with financial management. In 2007, she wrote about inflation and food shortages. In 2010 she wrote a report about the finances of the state-run Telecom of Kosovo.

In 2012, Xharra had legal problems. She wrote a report about government corruption and about politicians' connections with local business. The court decided that Xharra acted correctly. They said she followed the Code of Ethics for print media of Kosovo.

In 2012, Xharra investigated the increase of religious activity in the former Yugoslavia. She wrote about religious extremism and its effect on society. When she investigated Islamic extremists in Kosovo, she found connections with terrorist organizations. Xharra's report helped the government with the problem. After the report, she received death threats.

Xharra won the UNDP Prize three times--in 2006, 2007, and 2008--for her articles on corruption in Kosovo. In 2012 she won a Balkan Fellowship for Journalistic Excellence and studied the changing attitudes towards Islam in Kosovo. In 2013 she won the Rexhai Surroi Award from the KOHA Group for an article on extremism. She also won the Stirring Up Debate Award from INPO Ferizaj for starting public discussion on religious extremism. In 2015 she won the US Secretary of State's International Women of Courage Award.

All content from Kiddle encyclopedia articles (including the article images and facts) can be freely used under Attribution-ShareAlike license, unless stated otherwise. Cite this article:
Arbana Xharra Facts for Kids. Kiddle Encyclopedia.