The Arcade Depot was the main Southern Pacific Railroad passenger railway station, from 1888 until 1914. It was located on Alameda Street, between 5th and 6th Streets, in Los Angeles, California. 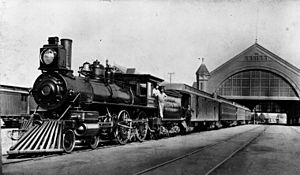 rThe land for the station was furnished to Southern Pacific by the City of Los Angeles, which was intended to lure the railroad to town. The Victorian style wooden station was completed in 1888. It was located on the site of the former orange groves of William Wolfskill, on the east side of Downtown Los Angeles towards the Los Angeles River. It was a massive wooden structure, 500 feet (150 m) long, with skylights and an arched roof clearing 90 feet (27 m) above the platforms below.

The station replaced the Southern Pacific River Station as the main L.A. passenger terminal, which was located next to a freight yard farther outside of downtown L.A.

The Arcade Depot was closed in 1914, when the Southern Pacific opened the Los Angeles Central Station, in eastern Downtown Los Angeles. The old depot was demolished soon after, for new outdoor platforms serving Central Station.

All content from Kiddle encyclopedia articles (including the article images and facts) can be freely used under Attribution-ShareAlike license, unless stated otherwise. Cite this article:
Arcade Depot Facts for Kids. Kiddle Encyclopedia.