Archer Point Light is an active lighthouse on Archer Point, a conical, 60-metre-high (200 ft) grassy headland about 14 kilometres (8.7 mi) southeast of Cooktown, Queensland, Australia. Originally an 1883 timber frame lighthouse covered with galvanised iron, it was replaced in 1975 with a modern square concrete equipment room topped with a lantern. 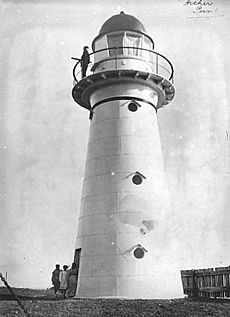 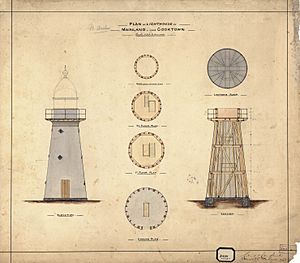 Plans for the original lighthouse, 1882

The station was established in 1883. The original lighthouse was a timber frame lighthouse covered in rolled galvanised iron sheeting, much like Low Isles Light and Flat Top Island Light. It had four floors including the gallery floor, with ladders leading from one floor to the next.

In 1975 the current lighthouse was built, and was automated and electrically operated to begin with. The base of the old lighthouse still exists at the location. The original lenses are now on display at the Queensland Maritime Museum.

The current lighthouse is a square concrete equipment room topped with a lantern. It was the seventh and last of a group of seven concrete towers erected by the Commonwealth between 1964 and 1979. By order of construction the lights were Cape Capricorn Light, New Caloundra Light, Point Danger Light, New Burnett Heads Light, Fitzroy Island Light, Point Cartwright Light and itself.

The current light source is a 35,000 cd 120 Volt 1000 Watt Tungsten-halogen bulb, fed from the mains electricity, with a diesel generator for backup.

The site and the light are operated by the Australian Maritime Safety Authority. The site is open to the public, accessible by a gravel road, but the tower is closed.

All content from Kiddle encyclopedia articles (including the article images and facts) can be freely used under Attribution-ShareAlike license, unless stated otherwise. Cite this article:
Archer Point Light Facts for Kids. Kiddle Encyclopedia.