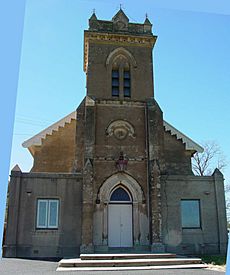 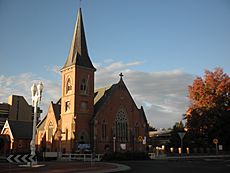 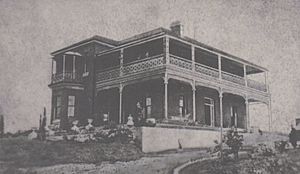 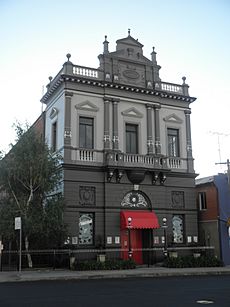 Italianate style stuccoed and decorated surfaces on the façade of the former Masonic Hall, built 1889.

Covering the period from 1815 to 1840, this Old Colonial period is mostly of Bathurst red brick, sometimes limewashed, with 12-paned windows and four- or six-panelled doors. Examples of this style include Old Government House (c. 1820), and Holy Trinity Church (Gothic style).

During the Early Victorian period from 1840 to 1860 the structures are mostly small domestic buildings. Characteristics of this style has the building line right up close to the street or the front verandah directly on the street. An example of this style include 'Loxsley' a gentlemans townhouse of the period, and the Royal Hotel originally a single storey building.

The Mid Victorian period from 1860 to 1880 coincides with greater affluence and more building materials becoming available such as glass. Windows typically now became 4 or 6 panes. Row housing is still a common layout, sometimes in a Gothic influenced style with steeply pitched roofs. An example of this style is the Webb Building built in 1862. During this period, Edward Gell designed many of the main buildings including the ornate St. Stanislaus' College, the railway station (1875) of the Victorian Tudor style with dutch gables topped by finials, bay windows and cast-iron verandah, and a great baronial mansion called Abercrombie House, a large, three-storey, 40-room mansion in the Scottish baronial style. Bathurst Hospital is a large Victorian era hospital complex in the second empire style, constructed of Bathurst red bricks, verandahs are decorated with timber posts, arched brackets and cast iron balustrades.

Many Bathurst mansions were built of the Italianate style in this period, with features such as bay windows, cast iron columns, lacework and verandahs. These include 'Woolstone' (1883), 'Logan Brae' (1877 and now a convent) and 'Delawarr' (pronounced Delaware) (1878).

During the Late Victorian period from 1880 to 1900, the Bathurst Showground Buildings (c. 1880s) represent one of the most intact groups of nineteenth century timber showground pavilions in New South Wales. The style is known as Carpenter Gothic. The old technical college is a two-storey American Romanesque building erected c. 1896 of red brick with terracotta facings and other detailing. The interior is also of a high quality. Italianate architecture appears in several Bathurst buildings including the former Masonic Hall, now known as Carrington House, with stuccoed and decorated surfaces on the façade, and the Westpac Bank building.

During the Inter War period from 1915 to 1940, there was great architectural change. Examples in Bathurst include the Knickerbocker Hotel in the functionalist style and the old Commonwealth Bank built in the Free Classical style. With the coming of electricity in 1924 unique cast iron light posts and lanterns were installed in the centre of the wide city streets and these are still an architectural feature of the city streetscape.

All content from Kiddle encyclopedia articles (including the article images and facts) can be freely used under Attribution-ShareAlike license, unless stated otherwise. Cite this article:
Architecture in Bathurst, New South Wales Facts for Kids. Kiddle Encyclopedia.