Bathurst Correctional Centre is a prison for men and women located in the city of Bathurst, New South Wales, Australia, and operated by the Department of Communities and Justice. Bathurst holds inmates sentenced under State or Australian criminal law, along with a small number of remand prisoners. 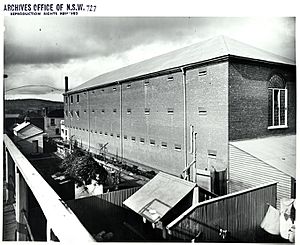 Bathurst Gaol is composed of a square compound with a gatehouse and two watch towers located at the far corners. The Governor and Deputy Governors Residences are located outside the main compound walls. Internally the (now demolished) chapel formed the focus of the gaol. Four cell ranges and the cookhouse radiated out from the chapel. On one side of the chapel forecourt was the totally separated female compound. On the other side was the male hospital.

Bathurst Gaol is significant as one of two model prisons designed by the Colonial Architect's Office in the late 1870s and early 1880s; as an indication of advances in penal architecture in the late nineteenth century; for its continued use as a gaol.

All content from Kiddle encyclopedia articles (including the article images and facts) can be freely used under Attribution-ShareAlike license, unless stated otherwise. Cite this article:
Bathurst Correctional Centre Facts for Kids. Kiddle Encyclopedia.