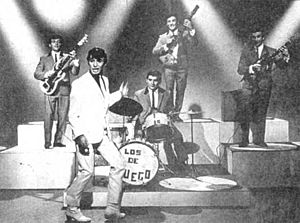 Argentine rock began by recycling hits of English-language rock & roll. However a rising trend of composing new songs mostly in Spanish can be traced at late 1960s, when several garage groups and aspiring musicians began composing songs and lyrics that related to local social and musical themes. Since then, Argentine rock started a continued and uninterrupted evolution through the 1970s and into the 1980s, being widely considered one of the most prolific and successful forms of Rock en Español, and one of the most important non-English language forms of rock music in the world. In Argentina it is known as "Rock Nacional" (/rok.nasjo'nal/), literally National Rock (national here meaning local, not international).

A distinguishing trait of Argentine rock is its insistence on Spanish language lyrics. It's rare for an Argentine rock band to sing in a foreign language as is common in other countries (except to convey a sense of artistic freedom, or in an attempt to isolate their message or aesthetic). Argentine Rock Nacional is one of the principal predecessors of the cultural and musical movement in Latin America known since the 80's as Rock Latino. Argentine rock today is a blanket term describing a number of rock styles and sub-cultures within Argentina.

All content from Kiddle encyclopedia articles (including the article images and facts) can be freely used under Attribution-ShareAlike license, unless stated otherwise. Cite this article:
Argentine rock Facts for Kids. Kiddle Encyclopedia.