Kids Encyclopedia Facts
Not to be confused with Argus Centre. 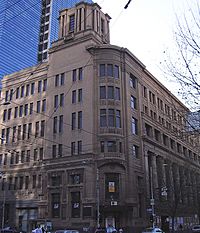 The Argus Building, designed by Godfrey & Spowers, opened in 1926 on La Trobe Street as the newspaper's headquarters.

The Argus Building on the corner of La Trobe and Elizabeth streets in Melbourne, Australia, is notable as the former premises of The Argus newspaper for 30 years (1926–1956). It is classified by the National Trust and is listed on the Victorian Heritage Register. In 2012 it was assessed as one of Australia's top ten endangered heritage buildings.

An 1855 map shows St John's church and school at this location. Documents from 1880 and 1905 show an enlarged church and a row of two-storey shops along Elizabeth Street.

The site was acquired by the publishers of The Argus and The Australasian for the development of a six-storey purpose-built building to accommodate the numerous workers and massive composing and printing plant deployed in producing high-circulation letterpress newspapers, as expounded in a special supplement, "Entering the New Home", published on 9 September 1926.

The last issue of The Argus emerged from the building on Saturday 19 January 1957. It was announced that the company's other activities would continue, including The Australasian Post, Your Garden and other operations in radio and commercial printing.

In 1991, an award-winning office building designed by Nonda Katsalidis was built next door and named the Argus Centre. In 2004 La Trobe University bought the Argus Building with the intention to redevelop and house legal and business schools in the building, as well as a ground floor shopping precinct. Due to the emerging costs associated with renovating the building, La Trobe University sold the site for $15 million in 2010 to Shesh Ghale, owner of the Melbourne Institute of Technology, who similarly intends to convert the site into an educational facility.

All content from Kiddle encyclopedia articles (including the article images and facts) can be freely used under Attribution-ShareAlike license, unless stated otherwise. Cite this article:
Argus Building Facts for Kids. Kiddle Encyclopedia.