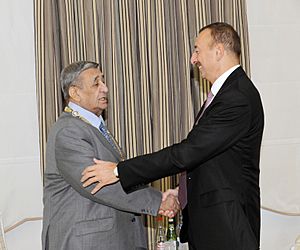 Arif Malikov (also Melikov; 13 September 1933 – 9 May 2019) was an Azerbaijani composer. His first major composition "Legend of Love" was staged at the Kirov State Academic Theatre of Opera and Ballet in Leningrad. The ballet was staged in many countries in Europe.

All content from Kiddle encyclopedia articles (including the article images and facts) can be freely used under Attribution-ShareAlike license, unless stated otherwise. Cite this article:
Arif Malikov Facts for Kids. Kiddle Encyclopedia.