One Arizona Center is 240 feet (73 meters) tall and has 19 floors. It was completed in 1989. This tower houses various legal firms with Snell and Wilmer being the largest. Other tenants include the Greater Phoenix Convention and Visitor's Bureau (PHX CVB) and the main corporate offices of the Harlem Globetrotters.

Two Arizona Center stands at 260 feet (79 meters) tall and has 20 floors. It was completed in 1990 and is the headquarters of local electric utility Arizona Public Service or APS.

The large central plaza at Arizona Center includes richly landscaped courtyards and fountains designed by SWA Group, which won a National Merit Award by the American Society of Landscape Architects for its work on the plaza.

Nearby, a 30-story Sheraton Phoenix Downtown hotel opened in the fall of 2008. Also, several high-end condominium projects in the downtown area are under construction, newly opened, or in the planning stages.

Arizona Center was designed by The Rouse Company (on its festival marketplace model, which worked to great success in other cities) and opened in the fall of 1990 to great fanfare and high expectations, as it was considered one of the original components of the ongoing downtown revitalization efforts in Phoenix taking place since the early 1990s. 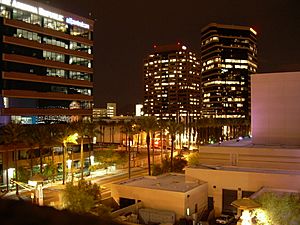 The expectations were high since it was developed by the same firm that created the highly successful Faneuil Hall Marketplace (Boston) and Harborplace (Baltimore). Arizona Center was expected to be a retail, dining and entertainment magnet which would jump-start interest in downtown redevelopment, but some critics felt suburban-oriented Phoenix was not ready to embrace a downtown development of this caliber. Critics have also pointed out the relative scarcity of permanent upscale apartment and/or condominium housing in the immediate vicinity as a factor in the lackluster performance of the mall. Most of the residential districts surrounding the downtown area are middle-to-lower income, not adequate to support the middle-to-high-end marketing mix that Arizona Center set out to provide.

Many of the initial retailers struggled to attract customers, and by 2003, the large second-story food court, similar to those found in suburban shopping malls, was closed and reconfigured into the Phoenix regional office of Detroit-based architectural firm SmithGroup.

The Rouse Company was acquired by General Growth Properties in 2004. After going through bankruptcy, GGP sold Arizona Center to CommonWealth REIT in 2011.

All content from Kiddle encyclopedia articles (including the article images and facts) can be freely used under Attribution-ShareAlike license, unless stated otherwise. Cite this article:
Arizona Center Facts for Kids. Kiddle Encyclopedia.