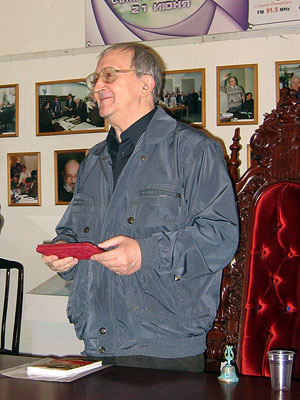 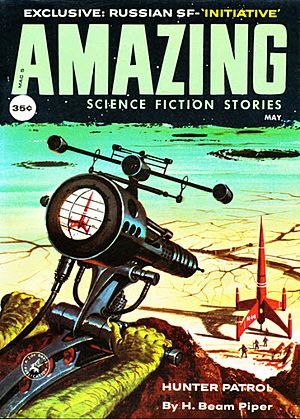 A translated Strugatsky story appeared in Amazing Stories in 1959

The Strugatsky brothers (братья Стругацкие or simply Стругацкие) were born to Natan Strugatsky, an art critic, and his wife, a teacher. Their father was Jewish and their mother was Russian Orthodox. Their early work was influenced by Ivan Yefremov and Stanisław Lem. Later they went on to develop their own, unique style of science fiction writing that emerged from the period of Soviet rationalism in Soviet literature and evolved into novels interpreted as works of social criticism.

Their best-known novel, Piknik na obochine, has been translated into English as Roadside Picnic. Andrei Tarkovsky adapted the novel for the screen as Stalker (1979).

Algis Budrys compared their "An Emergency Case" and Arkady's "Wanderers and Travellers" to that of Eando Binder. Several other of their fiction works were translated into English, German, French, and Italian, but did not receive the same magnitude of critical acclaim as that granted by their Russian audiences. The Strugatsky brothers, however, were and still are popular in many countries, including Estonia, Hungary, Poland, Bulgaria, the former republics of Yugoslavia, and Germany, where most of their works were available in both East and West Germany. They are well-known Russian science fiction writers with a well-developed fan base.

The Strugatsky brothers were Guests of Honour at Conspiracy '87, the 1987 World Science Fiction Convention, held in Brighton, England.

In 1991, Text Publishers brought out the collected works by Arkady and Boris Strugatsky.

Arkady Strugatsky was born 25 August 1925 in Batumi; the family later moved to Leningrad. In January 1942, Arkady and his father were evacuated from the Siege of Leningrad, but Arkady was the only survivor in his train car; his father died upon reaching Vologda. Arkady was drafted into the Soviet army in 1943. He trained first at the artillery school in Aktyubinsk and later at the Military Institute of Foreign Languages in Moscow, from which he graduated in 1949 as an interpreter of English and Japanese. He worked as a teacher and interpreter for the military until 1955. In 1955, he began working as an editor and writer. In 1958, he began collaborating with his brother Boris, a collaboration that lasted until Arkady's death on 12 October 1991. Arkady Strugatsky became a member of the Union of Soviet Writers in 1964. In addition to his own writing, he translated Japanese language short stories and novels, as well as some English works with his brother.

Born 14 April 1933, Boris Strugatsky remained in Leningrad with his mother during the siege of the city during World War II. He graduated from high school in 1950 and applied to the physics department at Leningrad State University, but studied astronomy instead. After graduating in 1955, he worked as an astronomer and computer engineer at the Pulkovo observatory. In 1960 he participated in a geodetic and astronomical expedition in the Caucasus. Boris Strugatsky became a member of the writers' union of the USSR in 1964. In 1966, he became a full-time writer. From 1972 he acted as the head of the Leningrad seminar of young speculative fiction writers, which subsequently became known as the "Boris Strugatsky Seminar." He established the "Bronze Snail" literary prize. He was an agnostic atheist. After the death of his brother, he published two more novels under a pseudonym. Boris Strugatsky died in Saint Petersburg on 19 November 2012.

Several of the Strugatsky brothers' books take place in the World of Noon, also known unofficially as the Wanderers Universe. The name is derived from the title of one of their texts, Noon: 22nd Century.

The main characteristics of the Noon Universe are: a very high level of social, scientific, and technological development; creativity of the general population; and the very significant level of societal maturity compared to the modern world. For instance, this world knows no monetary stimulation (indeed, money does not exist), and every person is engaged in a profession that interests him or her. The Earth of the Noon Universe is governed by a global meritocratic council composed of the world's leading scientists and philosophers. That Noon World has been clearly named as "World of Communism" in their novels, which was handy for publishing their novels in the USSR, where the Communist Party decided whether a book would be printed and approved for mass circulation.

The Noon Universe was described by the authors as the world in which they would like to live and work. It became highly influential for at least a generation of Soviet people, e.g., a person could quote the Strugatsky books and be sure of being understood. At first the authors thought the Noon Universe would become reality "by itself", but then they realized that the only way to achieve it was by inventing the High Theory of Upbringing, making the upbringing of each person a unique deed.

One of the important story arcs of those books addresses how the advanced human civilization covertly steers the development of those considered less advanced. Agents of humans are known as Progressors. At the same time, some humans suspect that a very advanced spacefaring race called Wanderers exists and is "progressing" humanity itself.

The following titles were published by Arkady Strugatsky under the pseudonym S. Yaroslavtsev (C. Ярославцев):

The following titles were published by Boris Strugatsky under the pseudonym S. Vititsky (С. Витицкий):

The Strugatskys' books were often adapted for screen, stage, comics and video games. Some of the adaptations are very loose, like Tarkovsky's Stalker, some are not adaptations but rather new scripts written by Brothers themselves, like The Sorcerers.

Several writers have to a varying degree paid their tribute to the works of Strugatsky brothers:

All content from Kiddle encyclopedia articles (including the article images and facts) can be freely used under Attribution-ShareAlike license, unless stated otherwise. Cite this article:
Arkady and Boris Strugatsky Facts for Kids. Kiddle Encyclopedia.