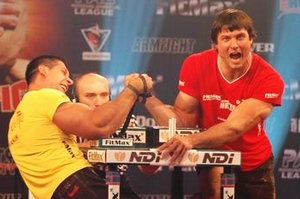 Many things can play a part in a player's success in arm wrestling. Skill and overall arm strength are the two greatest contributing things to winning an arm wrestling match. Other things such as the length of an arm wrestler's arm, his/her muscle and arm mass/density, hand grip size, wrist endurance and flexibility, reaction time, as well as countless other traits, can add to the advantages of one arm wrestler over another. It is sometimes used to prove who is stronger between two or more people. 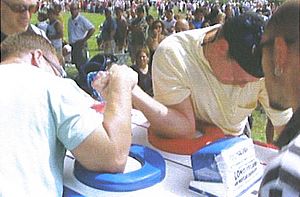 The player on the right is in an injury-prone or "break arm" position. His shoulder must be in line with or behind the arm, as seen with the player on the left. This is cause for a referee to stop the match.

Arm wrestling puts enormous pressure/twist on the upper arm's humerus bone to a degree seen in few other physical activities. Most people's bones are not used to being so stressed in this way, and injuries can occur surprisingly easily. The arm typically fails because of a diagonal break at or below the midpoint between the shoulder and the elbow.

The natural tendency of an inexperienced arm wrestler is to push the hand, wrist, and shoulder in the same coordinated direction, against the force being applied by the opponent. This is how we throw a baseball or hit a tennis ball.

However, turning one's shoulder this way simply adds to the pressure already being applied to the humerus by the opponent. US Arm Sports advises of the danger of "letting your shoulder get inside your hand." It is better to pivot your shoulders so that you never look away from your hand.

If the tendons and ligaments are too weak to support the pressure, the muscles can cause a complete tendon blow (pop). However, tendons can be strengthened with many methods. When tendons are in pain, they require blood so they can heal faster. Doctors and arm wrestlers recommend doing rehabilitation training or therapy, exercising with light weights and many repetitions for 30 - 45 minutes non-stop to pump the blood into arms. Tendons can get bigger with time, though it is a very slow process. Experienced arm wrestlers can have tendons 3 to 4 times bigger than average people.

All content from Kiddle encyclopedia articles (including the article images and facts) can be freely used under Attribution-ShareAlike license, unless stated otherwise. Cite this article:
Arm wrestling Facts for Kids. Kiddle Encyclopedia.