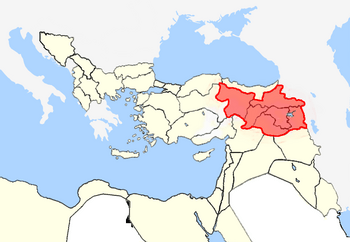 The term "Armenian Question" refers to powers of Europe's involvement to the Armenian subjects of the Ottoman Empire beginning with the Russo-Turkish War of 1877-78. However, in specific terms, the Armenian question refers to the protection and the freedoms of Armenians from their neighboring communities.

The "Armenian Question", like the "Eastern Question", remained a factor (issue) in international politics, first with Great Britain and Germany; then Russia taking on the role of Ottoman Armenians protector.

All content from Kiddle encyclopedia articles (including the article images and facts) can be freely used under Attribution-ShareAlike license, unless stated otherwise. Cite this article:
Armenian Question Facts for Kids. Kiddle Encyclopedia.