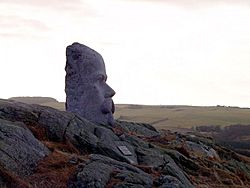 Sculpture in stone of Arne Garborg, located at his home in Knudaheio

Garborg championed the use of Landsmål (now known as Nynorsk, or New Norwegian), as a literary language; he translated the Odyssey into it. He founded the weekly Fedraheimen in 1877, in which he urged reforms in many spheres including political, social, religious, agrarian, and linguistic. He was married to Hulda Garborg.

He was nominated for the Nobel Prize in Literature six times.

Garborg grew up on a farm named Garborg, near Undheim, in Time municipality at Jæren in Rogaland county. He grew up together with eight siblings. Although he was to become known as an author, it was as a newspaperman that he got his start. In 1872 he established the newspaper Tvedestrandsposten, and in 1877 the Fedraheimen, which he served as managing editor until 1892. In the 1880s he was also a journalist for the Dagbladet. In 1894 he laid the ground, together with Rasmus Steinsvik, for the paper Den 17de Mai; which changed its name to Norsk Tidend in 1935.

His novels are profound and gripping while his essays are clear and insightful. He was never inclined to steer clear of controversy. His work tackled the issues of the day, including the relevance of religion in modern times, the conflicts between national and European identity, and the ability of the common people to actually participate in political processes and decisions.

In 2012 the Garborg Centre opened at Bryne, Time. It is dedicated to the literature and philosophy of Arne and his wife, Hulda. Several of their homes are now turned into museums, like Garborgheimen, Labråten, Kolbotn and Knudaheio.

"It is said that with money you can have everything, but you cannot. You can buy food, but not appetite; medicine but not health; knowledge but not wisdom; glitter, but not beauty; fun, but not joy; acquaintances, but not friends; servants, but not faithfulness; leisure, but not peace. You can have the husk of everything for money, but not the kernel."

All content from Kiddle encyclopedia articles (including the article images and facts) can be freely used under Attribution-ShareAlike license, unless stated otherwise. Cite this article:
Arne Garborg Facts for Kids. Kiddle Encyclopedia.