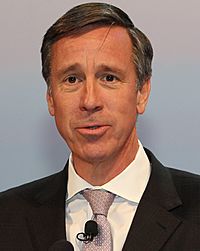 Arne Morris Sorenson (October 13, 1958 – February 15, 2021) was a Japanese-born American hotel executive. He was the President and Chief Executive Officer of Marriott International. He was born in Tokyo. He studied at the University of Minnesota.

Sorenson became the head of the largest publicly traded hotel chain in the world on March 31, 2012. He had been a director for Wal-Mart, and was the Chief Operating Officer for Marriott.

In May 2019, Sorenson was diagnosed with pancreatic cancer. He died from the disease on February 15, 2021 at the Johns Hopkins Hospital in Baltimore, Maryland at the age of 62.

All content from Kiddle encyclopedia articles (including the article images and facts) can be freely used under Attribution-ShareAlike license, unless stated otherwise. Cite this article:
Arne Sorenson Facts for Kids. Kiddle Encyclopedia.