Arohaki Lagoon (formerly Arahaki Lagoon) is a small ephemeral lagoon located in the Whakatāne District of the North Island, New Zealand. It is within the Whirinaki Te Pua-a-Tāne Conservation Park, south and can be accessed via a 6-kilometre (3.7 mi) walking track.

The Ngāti Whare Claims Settlement Act 2012 changed the name of the lagoon from Arahaki to Arohaki. According to the Ngāti Whare Deed of Settlement, the name is taken from a description of "the taking off of the birds, one by one, circling around".

Arohaki Lagoon holds significance for the local iwi, Ngāti Whare. It is seasonally used as a mahinga manu (bird gathering place), and the fish in the lagoon were used as a food source. 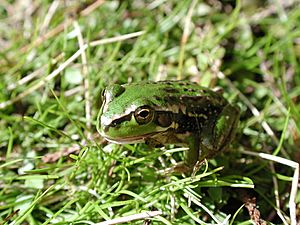 Arohaki Lagoon contains kōkopu (native galaxiid fish), and serves as a sanctuary and breeding ground for various bird species. Frogs can also be found at the lagoon.

All content from Kiddle encyclopedia articles (including the article images and facts) can be freely used under Attribution-ShareAlike license, unless stated otherwise. Cite this article:
Arohaki Lagoon Facts for Kids. Kiddle Encyclopedia.