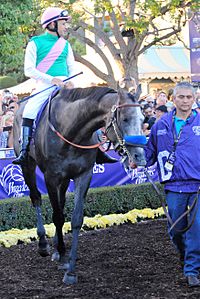 Arrogate (April 11, 2013 – June 2, 2020) was an American Thoroughbred racehorse. He won the 2016 Travers Stakes in a track record in his first stakes appearance. He then won the Breeders' Cup Classic and was named the American Champion Three-Year-Old Male Horse and World's Best Racehorse of 2016.

He won the 2017 Pegasus World Cup in a new track record followed by a win in the Dubai World Cup.

Arrogate was euthanized after falling in his stable on June 2, 2020 at the age of 7.

All content from Kiddle encyclopedia articles (including the article images and facts) can be freely used under Attribution-ShareAlike license, unless stated otherwise. Cite this article:
Arrogate Facts for Kids. Kiddle Encyclopedia.