The Art Gallery of Windsor is a not-for-profit art institute in Windsor, Ontario, Canada.

Established in 1943, the gallery has a mandate as a public art space to show significant works of art by local, regional, and national artists. The Art Gallery of Windsor has created, collected, presented, and conserved a collections of Canadian art, and is one of Windsor's most notable cultural reserves. 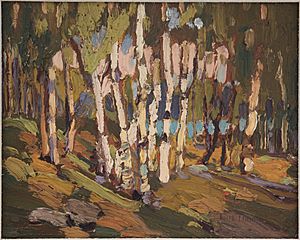 Under the direction of Kenneth Saltmarche the gallery acquired its first collection. In 1947, the Art Gallery of Windsor, or as it was known at the time, The Willistead Gallery, also became one of the founding members of The Southern Ontario Gallery Group, later known as the Ontario Association of Art Galleries.

By 1958, attendance at Willistead Gallery overwhelmed the small space. Along with conflict between the Art Association, which controlled the gallery, and the library board from which it grew, the Windsor art movement was in danger of collapse. After approaching Windsor City Council to negotiate the situation, the Willistead Art Gallery became an independent institution with its own board of directors.

However, by 1967, the gallery was in crisis again, and the search for a new home for the gallery began. In 1970 it was suggested that the gallery take up residence in the abandoned Carling Brewery warehouse on the waterfront, an appropriately modern setting for a gallery in a manufacturing hub. The Art Gallery of Windsor, as it was now known, opened its doors in 1975 and there developed over the span of twenty years one of Ontario's most significant collections of Canadian art.

In 1993, the Art Gallery of Windsor experienced another major shift in both location and outlook. The gallery moved to the Devonshire Mall, leasing its industrial waterfront building to the province of Ontario to house the new Casino Windsor in order to both raise the funds needed to expand the gallery and its collections.

For six years, the Art Gallery of Windsor remained in a limbo of sorts, unable to decide whether to remain in its inadequate Devonshire location, move to another location within the city and renovate, reclaim the warehouse location, or to build a new home for the gallery. Finally, in 1999, Dr. Lois Smedick, president of the AGW board of directors, unveiled plans for a new art museum on the old warehouse location. Shortly thereafter, the old Carling warehouse was torn down and a new modernist building was erected in its place, which houses the Art Gallery of Windsor today. A new museum, the Chimczuk Museum, is being built in the art gallery building, on the first floor, while the art gallery will occupy the two upper floors. The museum is named after Joseph Chimczuk, and will be opening in mid-January, but the grand opening ceremony will take place in mid-February, about a month after opening, to coincide with Heritage Week.

All content from Kiddle encyclopedia articles (including the article images and facts) can be freely used under Attribution-ShareAlike license, unless stated otherwise. Cite this article:
Art Gallery of Windsor Facts for Kids. Kiddle Encyclopedia.