Arta is a Greek city. It is the capital of Arta Prefecture, one of 51 prefectures of Greece. Its population is 24,725. Arta is known because of Arta's bridge. It is an old bridge on the Arachthos river. 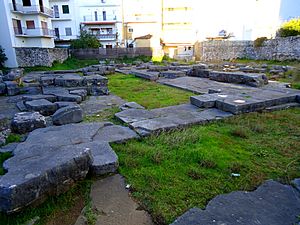 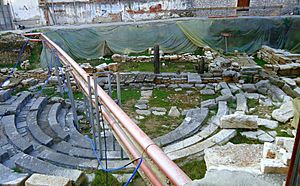 The modern city is on the site of ancient Ambracia. Remains of the classic era include the ancient walls, the ruins of an ancient temple of Apollo, a small theatre, and remnants of the southwest cemetery. 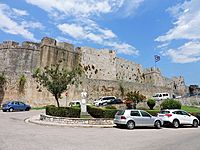 View of the Byzantine castle 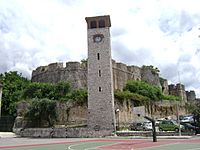 Clocktower in front of the castle 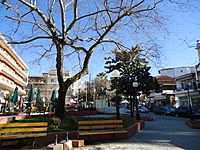 The town's fortifications were built by Michael I Komnenos Doukas in the early 13th century, but their present form is largely post-Byzantine. Secular architecture from the Byzantine period, including the palace of the Despots of Epirus, has vanished completely, but the city preserves numerous churches.

The most important Byzantine church is the cathedral Church of the Paregoretissa, built ca. 1290 by Nikephoros I Komnenos Doukas and his wife Anna Palaiologina Kantakouzene. Other important churches of the late Byzantine period are the Church of the Kato Panagia, built by Nikephoros I's father Michael II Komnenos Doukas, and the Monastery of Saint Theodora, housing the tomb of the city's patron, Theodora of Arta. Several other churches dating to the 9th and 10th centuries also survive in and around the city: Saint Basil of the Bridge, Saint Demetrios of Katsoures in Plisioi, the Panagia Blacherna monastery, the Panagia Vryoni in Neochoraki, the Red Church in Vourgareli, the Panagia of Koronisia in Koronisia and the Church of the Pantanassa in Filippiada.

All content from Kiddle encyclopedia articles (including the article images and facts) can be freely used under Attribution-ShareAlike license, unless stated otherwise. Cite this article:
Arta Facts for Kids. Kiddle Encyclopedia.