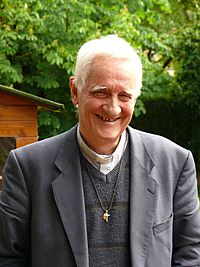 Arthur Hervet (11 November 1938 – 23 November 2020) was a French Roman Catholic priest. He was a member of the Assumptionists. He was known for his fight for Romani people. He was born in Bannalec, France.

In the mid-1980s, Hervet became chaplain of a Church boat in Conflans-Sainte-Honorine called the Je Sers. He founded the association La Pierre Blanche which helped the homeless and former prisoners.

All content from Kiddle encyclopedia articles (including the article images and facts) can be freely used under Attribution-ShareAlike license, unless stated otherwise. Cite this article:
Arthur Hervet Facts for Kids. Kiddle Encyclopedia.