Artists Space Gallery was an Australian art gallery showing mainly photography, as well as other media, through the 1980s in Melbourne. 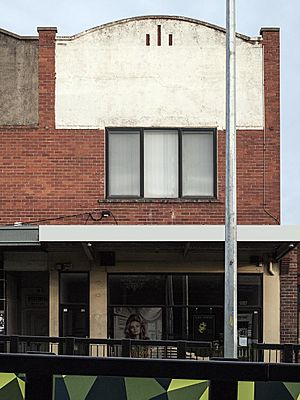 Facade of the former Artists Space Gallery at its original location in Essendon, as seen in 2020. The Gallery occupied the top floor, entered via stair from door left of shop.

The gallery was founded in 1978 by Melbourne painter and photographer Wes Placek. He was joined in the early 80's by his partner Sophie Nowicka a textile designer and artist, who assisted in administration of the gallery and in curatorial selection of exhibitions.

When it opened, the gallery occupied the top floor of a 1920s shopfront in the main street at 127 Buckley St., near the railway station in the working-class suburb Essendon. In 1987 the Gallery was relocated, closer to Melbourne CBD and amongst a growing number of other galleries. Though it also showed other media, it was among contemporary specialist photography galleries The Photographers' Gallery, Brummels and Church Street that revived the medium as an art form. The new space, with four times the floor area, was in a former warehouse in North Fitzroy at 150 Park Street on the corner of Best Street, opposite a linear park created from the Inner Circle Railway Line which had closed in 1981.

All content from Kiddle encyclopedia articles (including the article images and facts) can be freely used under Attribution-ShareAlike license, unless stated otherwise. Cite this article:
Artists Space Gallery Facts for Kids. Kiddle Encyclopedia.