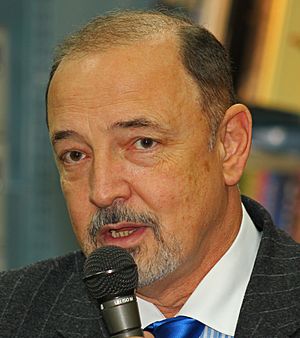 Artem or Artyom Mikhaylovich Tarasov (Russian: Артём Миха́йлович Тара́сов; July 4, 1950 — July 22, 2017) was a Russian businessman and political activist of Armenian descent. He was born in Moscow. In 1989 Tarasov became the first officially declared millionaire in the USSR. Tarasov is the co-founder of Kommersant daily newspaper, the first independent airline, Transaero, and was elected to the Russian parliament.

After a conflict with Soviet officials in 1990, he left the USSR and settled in London. In 1993, he returned to Russia and was once again elected to the Russian Duma. In 1996, he decided to run for President as an independent pro-business candidate, but his application was rejected by the electoral commission.

All content from Kiddle encyclopedia articles (including the article images and facts) can be freely used under Attribution-ShareAlike license, unless stated otherwise. Cite this article:
Artyom Tarasov Facts for Kids. Kiddle Encyclopedia.